Early History of All Saints Parish 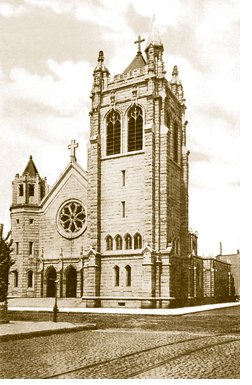 All Saints Parish, which was formerly the Lafayette  Section of Saint Patrick Parish, was organized November 1, 1896. The Rev. Joseph H. Meehan was called from Elizabeth, N.J., where he was assistant at St. Patrick Church, to take charge of the new parish.

Mass was celebrated for the first time in Lafayette Battery Hall on Whiton Street, November 15, 1896, and every Sunday thereafter until the school building was erected on the corner of Whiton and Lafayette Streets. This building, the lower part of which was used as a church, was begun April 29, 1897, and the following June the cornerstone was laid in the presence of a large concourse of people. On December 19, 1897, the dedication was performed by the late Rt. Rev. Winand Wigger. A solemn high Mass was celebrated by the Rt. Rev. Bishop O’Connor, then vicar-general. Rev. Eugene Carroll acted as deacon and Rev. John Westman sub-deacon.

The school was opened January, 1898, in the charge of the Sisters of Charity. The staunch Catholics of the parish responded most willingly to Fr. Meehan’s appeal for the Christian education of their children, with the result that school opened with an attendance of four hundred.

Feeling the need of the old church for a parish hall and desirous of erecting a more fitting temple, Fr. Meehan purchased the Van Horn property on the corner of Communipaw and Pacific Avenues for $33,650. Ground was broken and the foundation of the new church begun July 1906. The laying of the cornerstone took place September 9 of the same year.

The church is 85 by 167 feet, is built of North Carolina granite, and its style of architecture is English Gothic. The cost was about $165,000 without furnishings, and in its entirety the building was valued at $200,000. The Hardenberg homestead, which stood on the site of the new church, became the rectory.